The Donskoy cat is a breed of cat known also by several other names including the Don Sphinx, Russian Donskoy, Russian Hairless and Don Hairless, is a unique breed of cat that is a great family pet.

It is known to be really playful and active, a true inquisitive social breed of feline. In addition to being extremely active and playful, the Don Sphinx is friendly, loving, intelligent and gentle.

A gentle cat, the Don Sphinx is easy to groom especially since they like the companionship. That being the case, you should not keep it as a single pet.

This particular breed of cat is medium-sized with the most noticeable features being the little to no hair and the wrinkled skin. These features allow you to easily identify the Donskoy cat from any other breeds of feline.

Aside from the lack of hair and the wrinkled skin, you will also notice that Russian Donskoy cats have toes shaped oval, slim, long and webbed. The Russian Donskoy’s head has a shape like a wedge with large, long ears and eyes the shape of almonds. Russian Donskoy’s have beautiful eyes that come in variety of colors.

The skin of the Russian Donskoy cat is soft and warm. However, that does not mean they do need protection from too much sunlight exposure.

Donskoy cats will especially benefit from warmth, especially in the cold winter months. The coat of Donskoy cats is quite similar to human skin and they can grow coats during the winter, often on the chest, which they shed when the weather is warm again.

Where Donskoy Cats Came From?

The Donskoys were from Rostov-on-Don, Russia, discovered by Elena Kovalena in 1987. Kovalena stopped boys from torturing a kitten then and took it home with her after. She named the kitten, Varvara and soon after, the kitten began to lose her hair with Kovalena thinking it caused by the stress of what has happened to the cat.

She tired treating the kitten but without success.  Years later, when Varvara has her kittens of her own, the litter are a combination of haired and hairless offspring. Additionally, the kitten soon lost their hair which many people then is because of an illness.

Nemikina then started a breeding program with the kitten. The kitten’s hairless coat continued with her succeeding litters that lead to the speculation that a gene change is necessary in order for the cats to produce the coats.

With Nemikina’s efforts shewas able to create a new Russian breed of cat that she named Don Sphynx/Sphinx.

The name of the new cat breed, the Don from the Don River nearby while the Sphynx is for the cat’s apparent lack of hair. By 1987, the World Cat Federation recognized the new cat breed then by 2005, the International Car Association has the new breed added as well.

It becomes apparent to the world that the Don Sphynx is one of the unique breeds of cats around the world.

Families will love the Russian Donskoys for being smart, friendly and lovable. They are inquisitive, easy to train, social and affectionate cats that like to always being around people as well as other pets.

You might find the Russian Donskoys sometimes a little unfriendly to other cats. These cats are very friendly and sociable, so you can expect that they do not do well if you leave them alone.

The Donskoys need a lot of attention and interaction that is why they are not recommended the pet if you are getting a cat or pet for the first time or if you are not always at home.

Despite this, you will love how loyal Donskoy cats are. Their loyalty can even be compared to the loyalty of dogs that makes them one of the best pets.

The Donskoys are more active than other cats but they also sleep for a fair amount of time. It is better to keep your Donskoy cat indoors since they can be susceptible to extreme temperatures, not to mention being rare cats could have people steal them.

As for grooming needs, Donskoy cats do not need a lot of attention being almost hairless or bald.

Instead of brushing, Donskoy cats need to be wiped down every day, if possible. Their body produces oils but their hair is more enough to absorb it.

As often as needed or at least once a month, you should bathe your cat in order to prevent skin problems. You should also brush their teeth or they may suffer from tooth decay or gum disease.

Some of the possible health problems that Donskoy can develop include skin problems, sunburn, gum disease, tooth decay and sensitivity to extreme temperatures.

During winter months, Donskoys eat a lot in order to have higher body temperature. They enjoy the sun but you should not let them out for long or they can get sunburn.

How to Adopt a Donskoy Kitten? 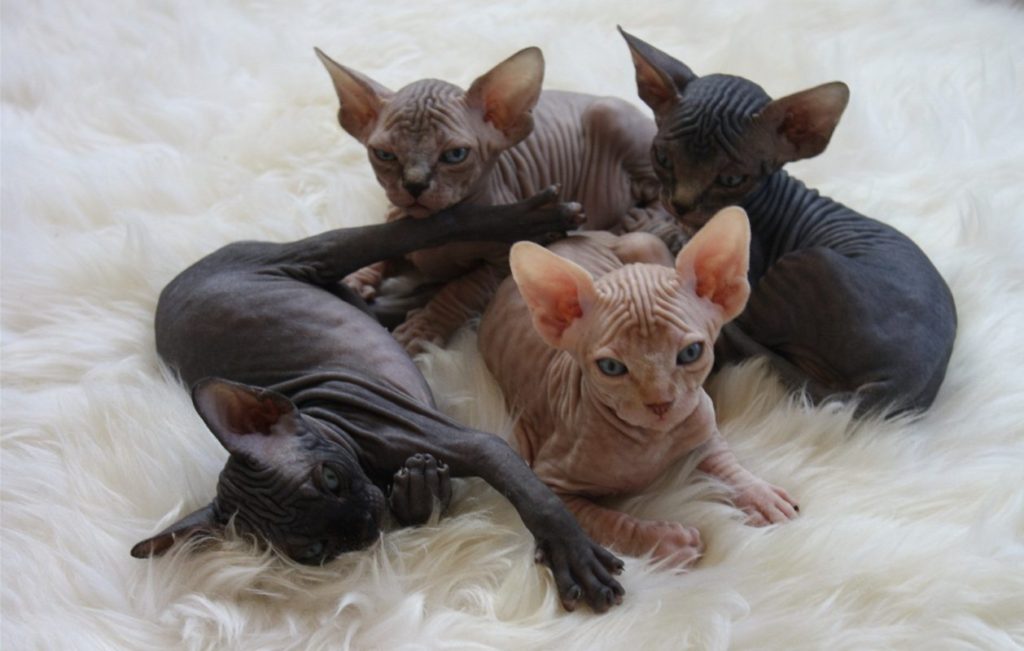 Donskoy kittens that are pet quality can range from few hundred dollars to thousand dollars.  Show quality Donskoy kittens are typically priced more than $1500 for their features that closely match that of the breed standard.

You might want  to adopt a Donskoy kitten because they are hairless but you should know they can still trigger allergies so you should live with the cat beforehand to be completely sure.